Each Wednesday from July 6 to August 3, campers (5 years-old and up) and counselors from the Cambodian Association of Greater Philadelphia spent the day at Cranaleith, where they were engaged in fun, and often meaningful, activities around the 10-acre Sanctuary of Trees. One such activity was the Mercy Station, where Cranaleith’s Program Director, Bernadette Rudolph, guided the campers to use nature and other techniques to learn something about themselves and the world in relationship to Mercy. Bernadette shared some of her observation from the Mercy Station, along with some pictures of the campers at Cranaleith. She also shared some drawings from the kids about what Mercy Station message was most meaningful to them. 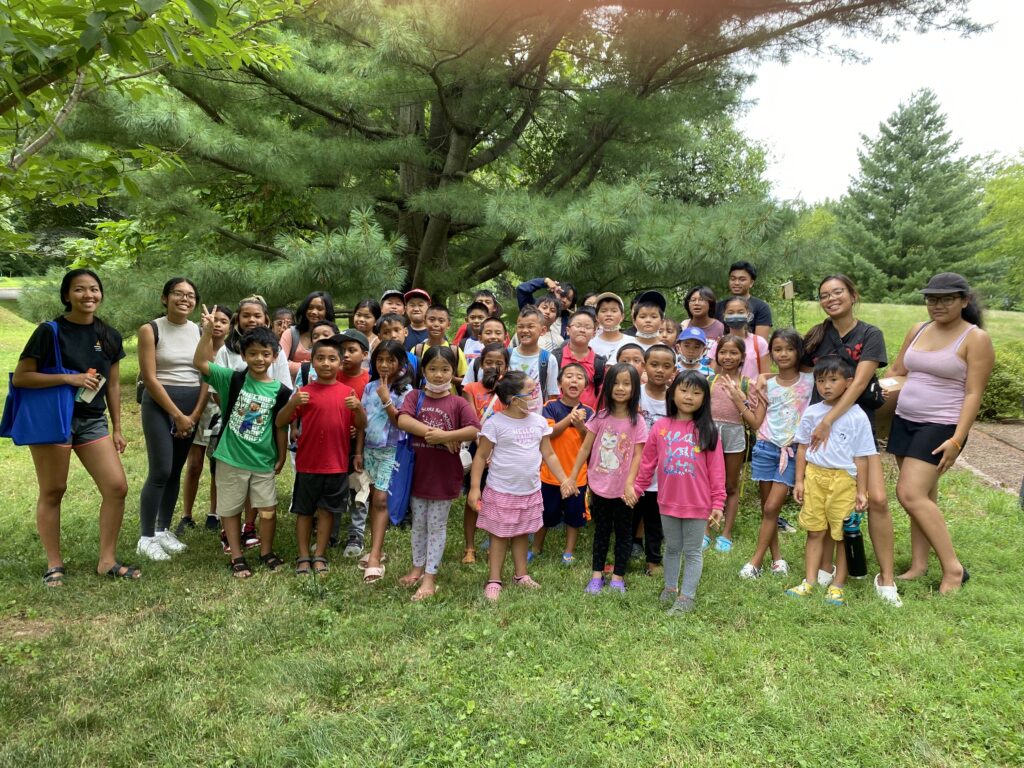 Mercy is about Noticing.
Noticing involves careful attention. This takes time. It means allowing the Other simply to be before you as you observe. We found the spring beneath Cranaleith, fed by a huge underground aquifer. We followed the stream over to the waterfall and then the pond. The campers were very excited to see the fish and the many bugs that filled the grasses and skated on the pond or flew above it. They followed me around the pond to see where the water went next. When I led the youngest campers, 5–6-year-olds, I felt smooth little hands slip into mine, one on either side, as we traipsed the narrow path. At the pond’s drain, we imagined where the water went next.

I invited the children to take fifteen minutes to silently notice. Many needed guidance to look more carefully than a superficial glance. Where does this stem lead? How does the bark feel? Look up to see where the leaves fell from.

When we gathered again to share what they had noticed, everyone was eager to share. The two younger groups shared via “I Spy,” but were so excited that they repeatedly revealed the answer before others could guess. Everyone described feeling peaceful during the experience of noticing. 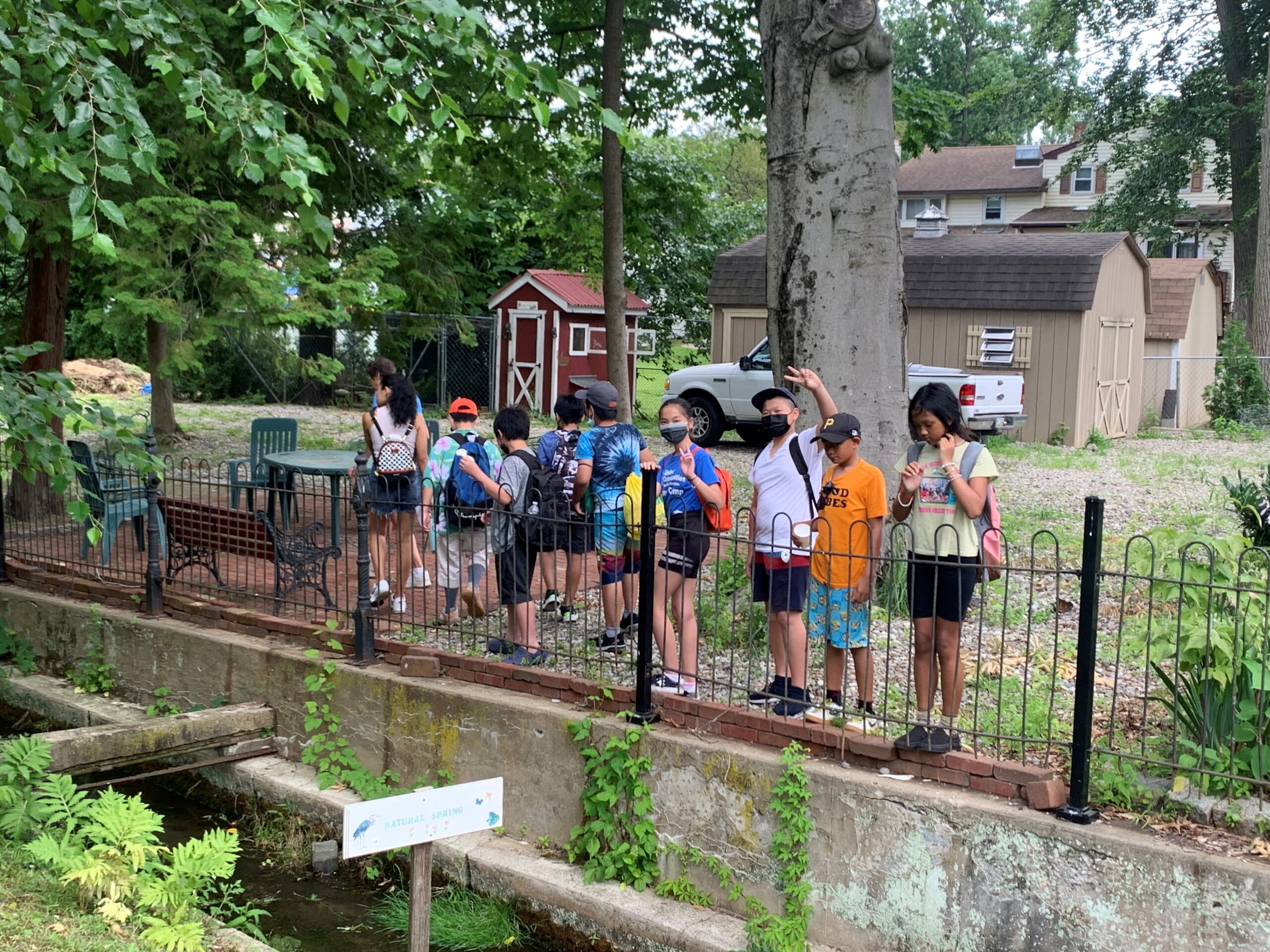 Mercy is about Listening.
After an introduction to the theme, we silently took a Sound Walk, where campers tried to hear as many different sounds as they could. Then we made up a story together, where each person contributes a portion that builds on what they have heard others tell. Lastly, we lay on blankets beneath the trees and listened to the waterfall, so we could listen to ourselves.

Most strikingly, Group 3, campers in 4-6th grades, really entered deeply into this experience. They began with little interest (and some attitude), so I introduced the Sound Walk as a challenge. “I don’t know if you are going to be able to do this…” The campers were completely silent as we walked. They fell over each other to list the multitude of sounds they had counted. Their story was the best of the day, full of action and creativity. Finally, I told them about how water sounds have helped me when I am troubled; I invited them to let the water reach the place inside where they could hear themselves. They were wonderfully quiet on the blankets, under the trees, listening to the fountain and the waterfall. When the quiet time was over, they sat up, amazed: “That was awesome.” “That was important.” “I need to do that again.” I encouraged them to use water sounds on apps to continue the practice. 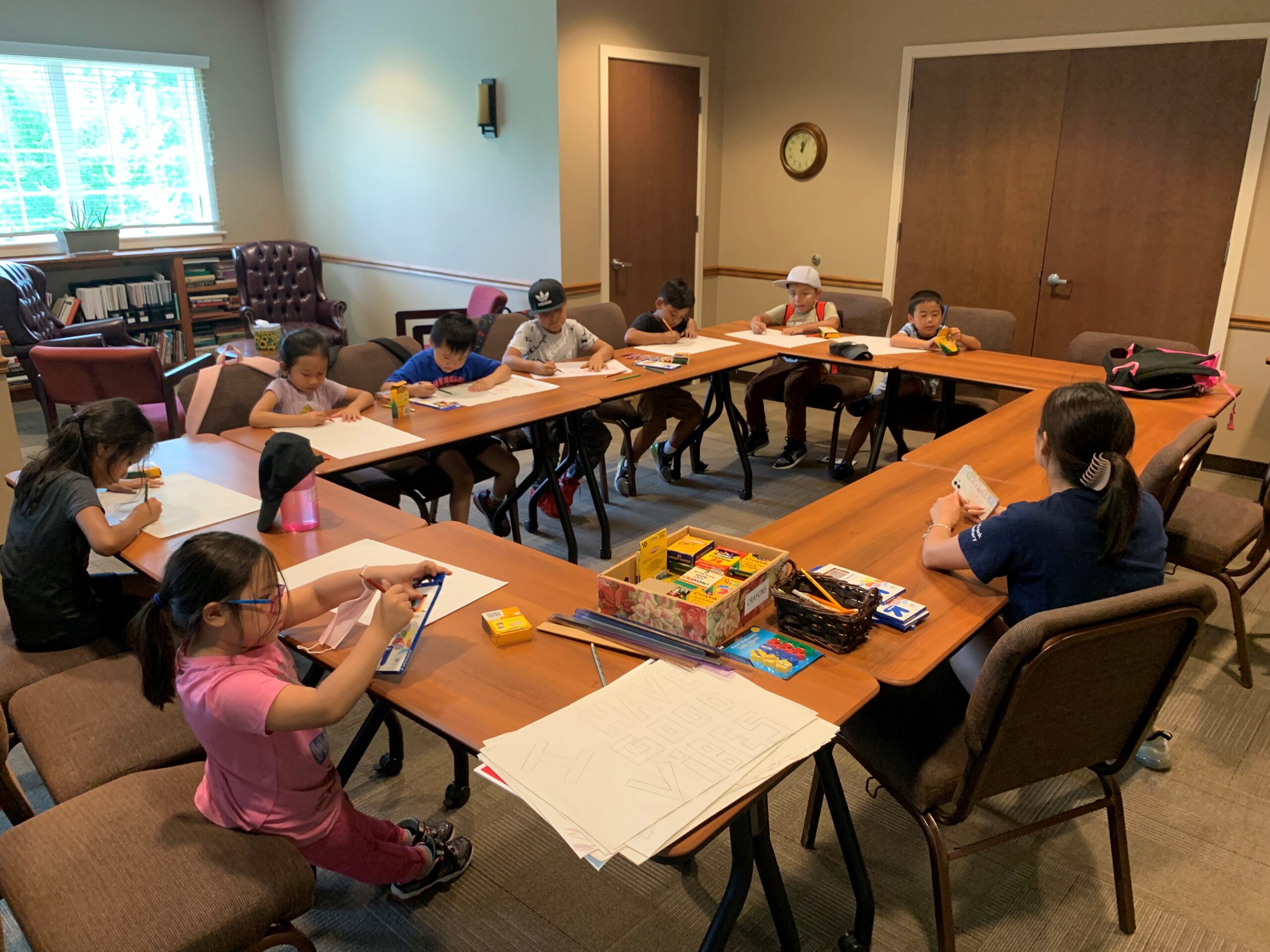 Mercy is about Compassion.
We had to be inside because of the extreme heat. Unfortunately, this meant we could not see compassion at work in nature. Instead, we focused on relationships. The older campers watched a Ted-Talk by a young girl with a skin disease. We talked about the choice we have to make to be compassionate. Younger campers had a hard time with the word compassion, so we talked about kindness instead. Everyone wrote or drew on a star a way they show compassion/kindness at home. Campers described caring for younger siblings, helping parents and grandparents with cooking, and inviting others to play.

Then younger campers play-acted scenarios of kindness. It was hard for the children to stand in front of others and speak. This was a skill I saw the counselors practicing with the students throughout the entire camp.

Alternatively, older campers worked in teams to create compassionate solutions to various situations. Working on a team was very hard for these groups. Some could only pass the paper and have each add ideas in writing. However, when it came time to share the “best” of their ideas, most campers were eager to share. 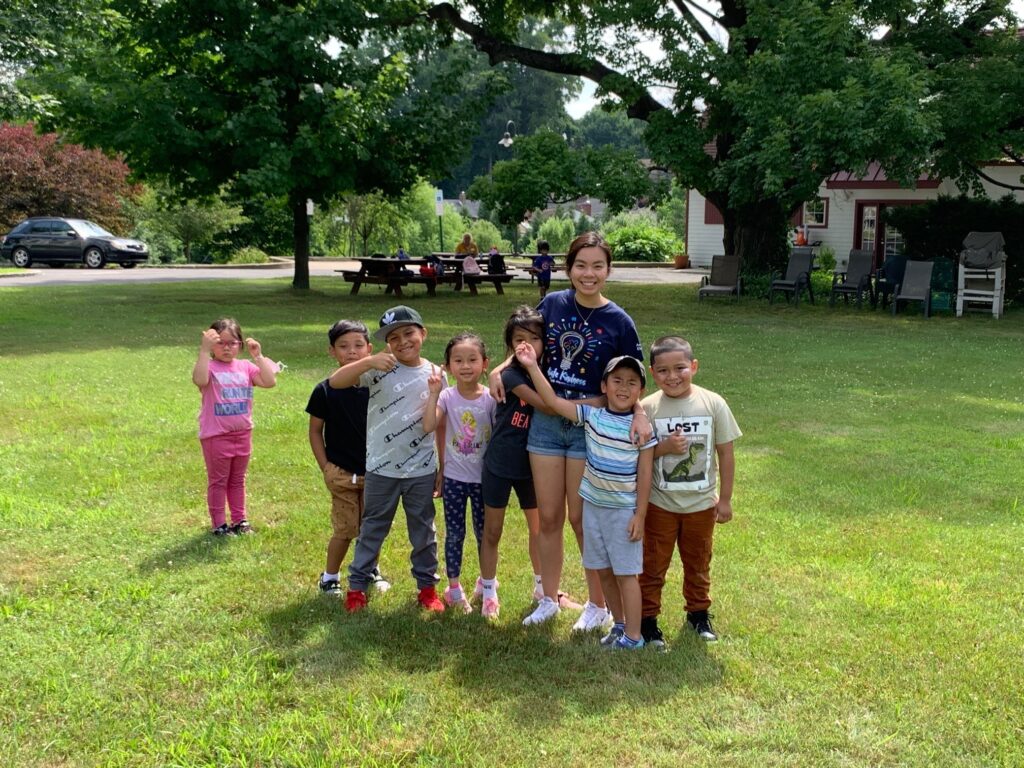 Mercy is about Forgiveness.
The first half of the station time explored forgiveness among people. The most striking realization came to the campers in the Group 4, the oldest group. We began in teams of three making lists of what is easy to forgive, what is hard and what is impossible. One group said nothing was impossible to forgive, which evoked protests from the other groups. Surely murder of someone you love is unforgiveable. One of the junior counselors, who is probably in seventh grade, told in awe of a video he saw in which a man whose child had been murdered forgave the murderer in court. The father had said he knew the murderer was more than his action and that he did not want the murderer to spend the rest of his life with the burden of the father’s lack of forgiveness. We discussed the choices that are indeed ours and the possibilities that we can gift another with through forgiveness.

This segued perfectly to looking at compost piles. We discussed how composting gives garbage the opportunity to become something useful, in fact, something life-giving. Everyone donned gloves and dug around in the bottom of the pile (which I had exposed) for worms and bugs that help with the change of waste into compost. There was great delight at the worms.

To conclude, we walked through the gardens to see what the compost had made possible. Campers were excited to find cucumbers, beans, peppers, tomatoes, corn and eggplant. They could not resist hefting the watermelons, five-inch, smooth round balls in the straw. The campers ran from bed to bed to see what was growing. 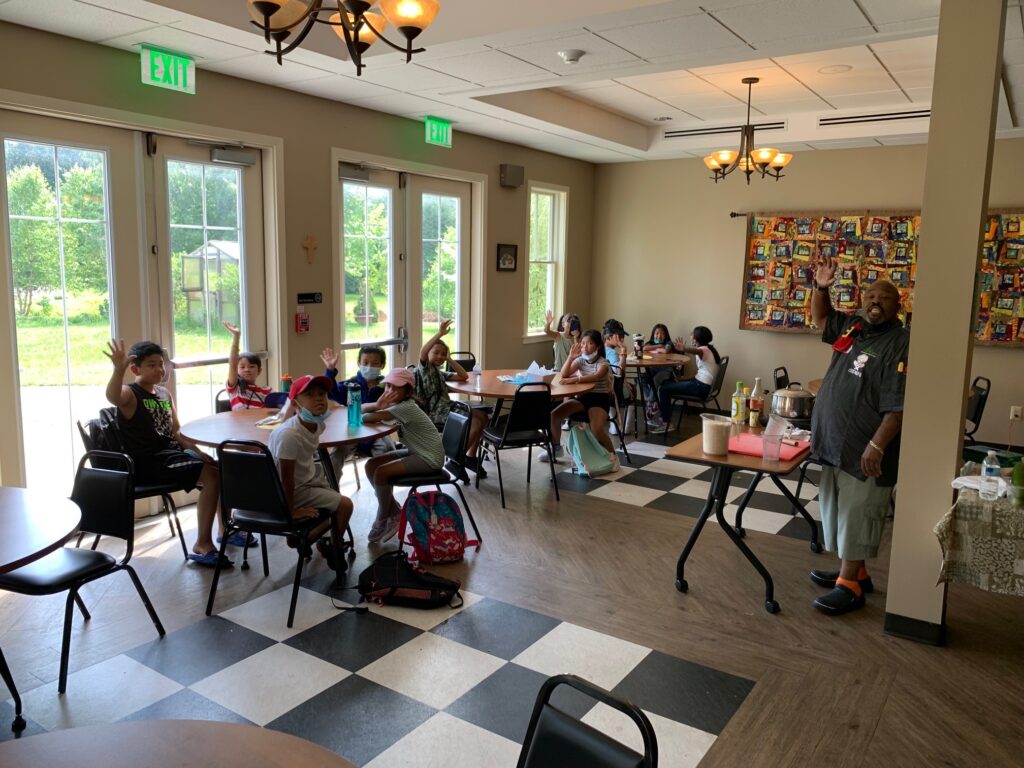 Mercy is about Connections.
We began with our connectedness to others. The youngest campers told about something they liked to do with a parent to grandparent. Campers in Group 2 got into triads and figured out three things they had in common. They were so pleased with themselves to discover their commonalities. The oldest campers divided up by place in their families of origin and determined what was best and worst about being oldest, middle, or youngest children.

Next, we looked at a Food Web poster that shows the connections between plants, bugs, birds, and animals. Although the bigger animals had no predators, I explained that when they died the worms and tiny bugs ate them and returned them to dirt, much as we had seen in the compost piles. Everybody eats everybody else in the end.

We created our own web of life. Each camper was assigned an object from the natural world (e.g. a bird, plant, water). Using a ball of yarn, we created our own web to see the connections between all these objects. Then, I took a scissor and cut one of the connections to represent humans killing or disrupting something in the web. Some campers gasped. I continued cutting as I noted the connections between all these natural beings. Each cut evoked gasps and exclamations. In Group 2 everyone fell to the ground as their connections were cut. They understood how what humans do impacts everything on this planet. 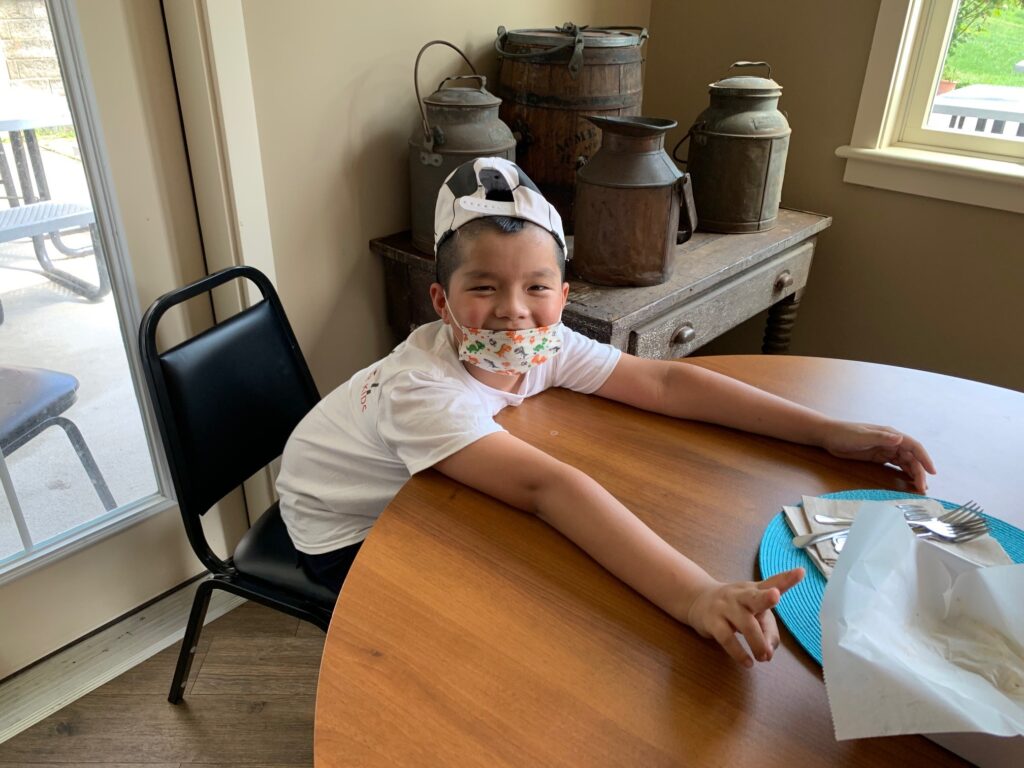 Our next discussion was about how we are connected to trees. Because Cranaleith has such a variety of species, I invited campers to find a tree that they could connect with and make friends with the tree for ten silent minutes. Some campers took most of the time to choose a tree and were noisy about getting to know it. They wanted leaves and seeds. They called enthusiastically to others about what they were discovering. Others were able to be still under their tree. They sat or stood, moving about now and then to touch the tree or pic something up. We were near a holly tree, whose branches arch down to the ground, creating a cave of sorts. I showed this cave to a camper whose disabilities easily overwhelmed him. He went into this cave and stood quietly for ten minutes, calmer than I had seen him before.

When I called the campers back to me, they all fell over each other to tell about their tree, to show its leaves/needles and seeds to the group. They had prickly horse chestnuts, gum balls, locust pods, pine cones, holly berries, and crab apples. I asked how it felt to spend time with their tree. Amid the comments of “peaceful,” “fun” and “interesting,” one little camper yelled, “It was magical!” I asked, “How was it magical?” He replied, “My tree has pinecones!” In each group, many campers asked, “Can I take my leaves and nuts home with me?” They cradled them like precious treasures. Of course, I said, “Yes!”

Here are some drawings the campers did at the end of camp to answer, “What was most meaningful to you about Mercy Station?”