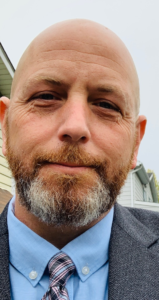 Christopher Grosso is called to serve mission-driven non-profits that work to improve the lives of our neighbors, neighborhoods, and the world. He has helped these organization by executing strategic communications and advancement plans that highlight mission-impact to attract new supporters and raise awareness of how others can help.

Inspired by Cranaleith’s mission to provide a space for those on the margins seeking transformation, and by the tranquil oasis of the campus, Christopher believes that telling the story of “who and how” Cranaleith serves will draw more people to utilize its services and to support its work.

Prior to coming to Cranaleith, Christopher was communications director for the Congregation of the Mission (Vincentians) of the Eastern Province (East Coast, Panama). He spent seven years in communications and advancement at Cabrini University, and previously at various other non-profits.

Christopher has an MA in Religion from Cabrini University, an MFA in Creative Writing (Poetry) from Brooklyn College, and a BA in English from West Chester University. In his spare time, Christopher enjoys writing (poems, novels, plays), running (well…at his age…slow jogging) and corralling his three mischievous cats. What he’s most proud of in life is the love of his wife and stepdaughter.

This site uses Akismet to reduce spam. Learn how your comment data is processed.

This website uses cookies to improve your experience while you navigate through the website. Out of these, the cookies that are categorized as necessary are stored on your browser as they are essential for the working of basic functionalities of the website. We also use third-party cookies that help us analyze and understand how you use this website. These cookies will be stored in your browser only with your consent. You also have the option to opt-out of these cookies. But opting out of some of these cookies may affect your browsing experience.
Necessary Always Enabled
Necessary cookies are absolutely essential for the website to function properly. This category only includes cookies that ensures basic functionalities and security features of the website. These cookies do not store any personal information.
Non-necessary
Any cookies that may not be particularly necessary for the website to function and is used specifically to collect user personal data via analytics, ads, other embedded contents are termed as non-necessary cookies. It is mandatory to procure user consent prior to running these cookies on your website.
SAVE & ACCEPT
COVID-19 Policies for All Guests
We prioritize your health and safety with hospitality and mercy.
Review the Policies
X