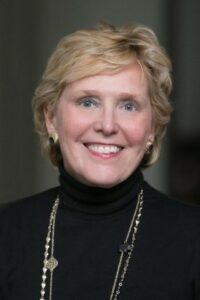 Maureen H. McCullough, JD is the Northeast/Mid-Atlantic Regional Director of Catholic Relief Services, the official international humanitarian agency of the Catholic community in the United States. CRS saves, protects and transforms lives in more than 100 countries, without regard to race, religion or nationality.

As Regional Director, Maureen coordinates and leads regional relationship management, advocacy, and program engagement in the region to inform, mobilize, and engage Catholics and others of good will in the promotion of global justice and peace through CRS.  In the over 15 years that McCullough has been in this role, she has worked extensively with Catholic Colleges and Universities in the region to develop, oversee and implement programs and resources to engage administration, faculty, and students in issues of global justice, international development, and peace building.

Maureen has travelled extensively overseas and presented at the 2014 South Africa Regional meeting in Zambia and the Latin American/Caribbean Regional meetings  in Cuba in 2008 and in Nicaragua in 2016.   She has led delegations of University faculty to see CRS programs in Rwanda and in Brazil and traveled to meet with CRS staff and partners in India, Pakistan, South Sudan, Nicaragua, Jerusalem/West Bank and Ethiopia to observe firsthand the work of CRS on the ground and to share the engagement of U.S. Catholics in support of the mission of CRS overseas.

She is a lawyer and prior to her position as Regional Director, she was a partner in a Philadelphia law firm leading the health care and non-profit groups.  Maureen has been a Mercy Associate since 1999 and was one of the founding board members of Cranaleith, a role she held for over 15 years.   She is deeply committed to equipping people to become advocates for change and engaging in the policy arena for the common good.